Learn how to create a sensor project in this guest post by Peter Wahr, an IoT expert.

The development of a Raspberry Pi sensor project is broken down into six steps. Here’s a simple overview:

This tutorial, however, will focus only on the first two steps; to know more, you can refer to the book, Learning Internet of Things.

In this tutorial, you will see the use of Raspberry Pi Model B with the following:

The sensor project will be developed on a remote PC using C#, as it’s a modern programming language that allows complete flexibility with IoT. It also allows you to interchange code between Windows, Linux, Macintosh, Android, and iOS platforms.

Once a project is compiled, executable files are deployed to the corresponding Raspberry Pi and then executed. Since the code runs on .NET, any language out of a large number of CLI-compatible languages can be used.

Development tools for C# can be downloaded for free from http://xamarin.com/.

To prepare Raspberry for the execution of the .NET code, you need to install Mono, which contains the Common Language Runtime for .NET that will help you run the .NET code on Raspberry. This can be done by executing the following commands in a terminal window in Raspberry Pi:

Your device is now ready to run the .NET code.

The sensor prototype will measure three things: light, temperature, and motion. To summarize, here is a brief description of the components:

For an introduction to GPIO on Raspberry Pi, please refer to http://www.raspberrypi.org/documentation/usage/gpio/.

Two guides on GPIO pins can be found at http://elinux.org/RPi_Low-level_peripherals.

For more information, refer to http://pi.gadgetoid.com/pinout.

The following figure shows a circuit diagram of the prototype board: 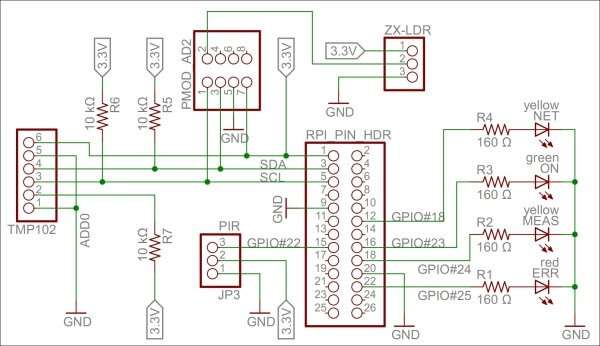 Interacting with the hardware

Interaction with the hardware is done using corresponding classes defined in the Clayster.Library.RaspberryPi library. For instance, digital output is handled using the DigitalOutput class and digital input with the DigitalInput class. Devices connected to an I2C bus are handled using the I2C class. There are also other generic classes, such as ParallelDigitalInput and ParallelDigitalOutput, which handle a series of digital input and output at once.

In the end, all classes communicate with the static GPIO class, which is used to interact with the GPIO layer in Raspberry Pi.

Each class has a constructor that initializes the corresponding hardware resource, methods and properties to interact with the resource, and a Dispose method that releases the resource.

The hardware interfaces to be used for the LEDs are as follows:

Use a DigitalInput class for the motion detector:

With the temperature sensor on the I2C bus, which limits the serial clock frequency to a maximum of 400 kHz, interface it as follows:

We interact with the light sensor using an analog-to-digital converter as follows:

The sensor data values will be represented by the following set of variables:

Historical values will also be kept so that trends can be analyzed:

Then, you need to provide information on how to connect to the underlying database. This can be done in the .config file of the application or the code itself. Specify a SQLite database and provide the necessary parameters in the code during the startup:

Finally, you will get a proxy object for the object database. This object can be used to store, update, delete, and search for objects in your database:

After doing this, the sensor won’t lose data if Raspberry Pi is restarted.

To facilitate the interchange of sensor data between devices, you’ll need an interoperable sensor data format based on XML, provided in the Clayster.Library.IoT library. Here, the sensor data consists of a collection of nodes that report data ordered according to the timestamp.

For each timestamp, a collection of fields is reported. There are different types of fields available: numerical, string, date and time, timespan, Boolean, and enumeration-valued fields. Each field has a field name, field value of the corresponding type, an optional readout type, a field status, Quality of Service value, and localization information.

The Clayster.Library.IoT.SensorData namespace helps you export sensor data information by providing an abstract interface called ISensorDataExport. The same logic can later be used to export to different sensor data formats. The library also provides a class named ReadoutRequest that provides information about what type of data is desired. You can use this to tailor the data export to the desires of the requestor.

The export starts by calling the Start() method on the sensor data export module and ends with a call to the End() method. Between these two, a sequence of StartNode() and EndNode() calls are made, one for each node to export.

To simplify the export, you can call another function to output data from an array of Record objects that contain the data. Use the same method to export the momentary values by creating a temporary Record object that would contain them:

Note that you need to check whether the corresponding readout type is desired by the client before you export data of this type.

How to use OpenCV with Raspberry Pi

The Export method exports an enumeration of Record objects. It first checks whether the corresponding readout type is desired by the client before exporting data of this type. The method also checks whether the data is within the requested time interval and that the fields are of interest to the client.

If a data field passes all these tests, it is exported by calling any of the instances of the overloaded method ExportField(), available on the sensor data export object. Fields are exported between the StartTimestamp() and EndTimestamp() method calls, defining the timestamp that corresponds to the fields being exported:

You can test the method by exporting some sensor data to XML using the SensorDataXmlExport class. It implements the ISensorDataExport interface. The result would look something like this if you export only momentary and historic day values:

If you enjoyed reading this tutorial and want to explore Internet of Things in detail, you can explore the book, Learning Internet of Things by Peter Wahr. The book follows a hands-on approach and demonstrates the building of several IoT projects, including actuators, cameras, controllers, and more. If you’re an IoT enthusiast or a developer keen on learning the fundamentals of IoT, this book is a must-have in your kitty.