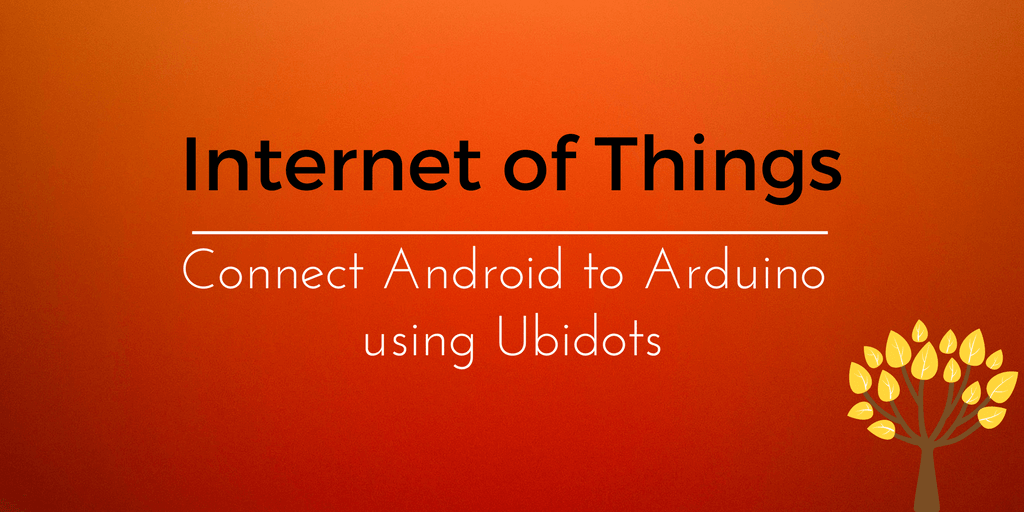 This article covers how to connect Ubidots to Arduino to build an IoT project. Moreover, this practical guide explores how Arduino can connect to Ubidots to send sensor readings. Moreover, in the second part of this tutorial, we will cover how to build an Android app that reads data stored by  Arduino into Ubidots cloud platform. This aspect is important because it is possible to store data in the cloud and analyze it later using different means. Once the data, like sensor values, is in the cloud is possible to access it using smartphones. This Arduino and Android integration project demonstrates how easy is connecting Arduino and Android together implementing an IoT system using a cloud IoT platform such as Ubidots. This IoT project can have several implementations and it can be really useful in real life IoT project. Usually, the integration between the mobile and the IoT ecosystem is a quite common scenario.

This project is built by two different parts:

For this purpose, the data is generated by a DHT11 sensor, that reads temperature and humidity. As cloud IoT platform to store data, we will use Ubidots platform. The sensor is connected to Arduino board that uses a Ethernet shield to connect to the network. In this project, the ethernet shield is Wiznet 5500.

Project Overview: how to use Ubidots with Arduino

The picture below shows the project overview : 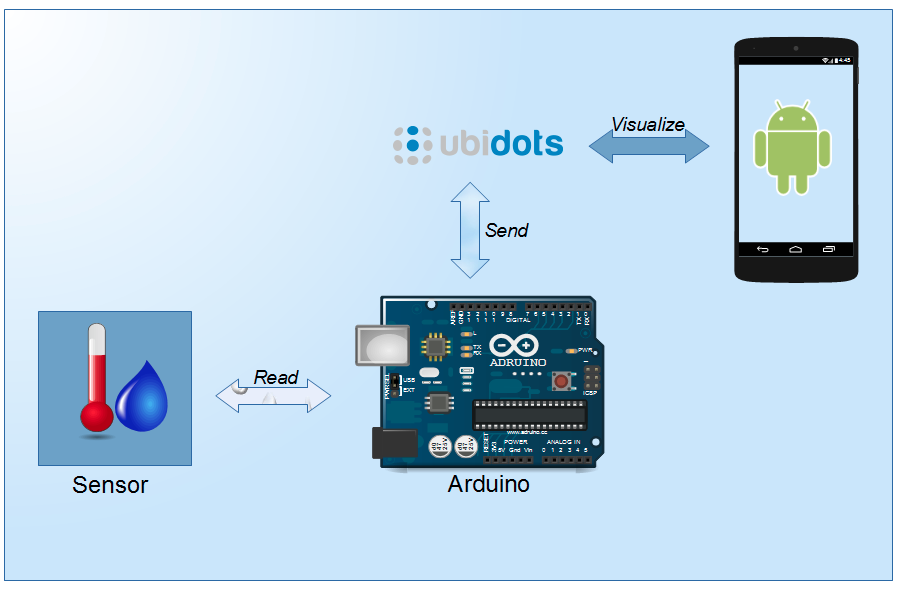 As soon as the temperature and humidity sensor starts reading values, it sends them through Arduino board to the cloud platform. The project uses Ubidots to store data in the cloud. This platform is easy to use and can be easily integrated with Arduino. Moreover, it has a built-in dashboard features, so that it is possible to create interesting dashboard to show, using charts, the values sent from the board.

Building an IoT project with Arduino and Ubidots

The first step is setting up the Arduino sketch and the wire connections. The DHT11 sensor is very easy to use and can be integrated easily and fast with Arduino. Moreover, there is a library that helps to develop the system. The picture below shows the schematic of this project: 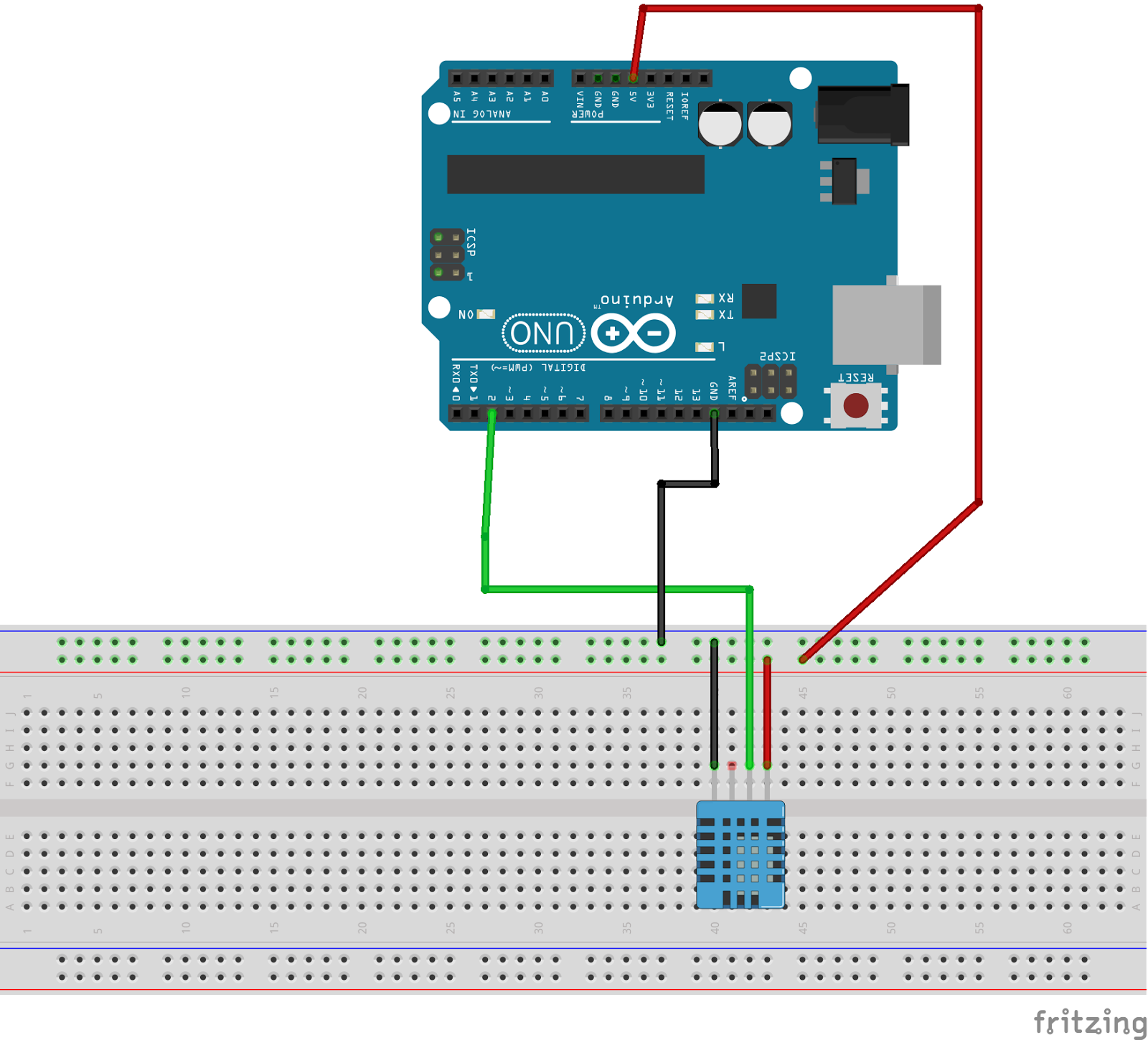 In this sketch,  DHT11 sensor is connected to Arduino board, that, in turn, uses the Arduino Ethernet shield to connect to the network to send data. As a first step, we check if everything is connected correctly trying to read the value of the temperature and the humidity. The snippet below shows the Arduino sketch to test the sensor:

One thing to remember is importing DHT11 library in your Arduino IDE. Running the example you should get the temperature and the humidity.
If everything works correctly, it is time to make things a little more complex explaining how to use Ubidots with Arduino.
As stated before, the purpose of this first part of this IoT project is describing how to use Ubidots to Arduino so that values read by sensors connected to Arduino are sent the the cloud. In a second step, this IoT practical guide covers how to develop an Android app that reads data stored in Ubidots.
Ubidots provides an example that can be useful. In Arduino, we have to develop an Arduino HTTP client that calls a JSON service passing the data we want to store in the cloud.
Referring to the Ubidots documentation, it is necessary to create an authentication token that the client has to send. Please read below to know more how to create the token.
In this IoT project, the Arduino HTTP client sends two variable at the same time:

Therefore, the URL to call is:

while the data in JSON format to send is:

Notice at line 65 and 66 we build the JSON data to pass to the service using the variable ids (please refer below to know how to get the id) and at line 83 we send in the header the authentication token.
The Arduino HTTP client for Ubidots is almost ready, it is time to configure the project in Ubidots.

Before configuring the variable, we have to create a Ubidots project:

Once the project is configured, we can define our variables

The pictures below show how to do it: 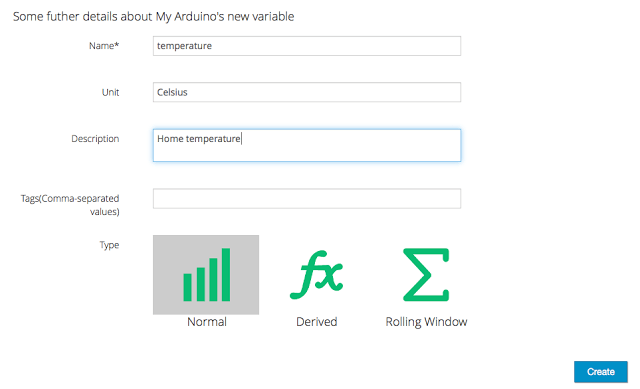 We do the same steps for humidity variable and finally, we have our dashboard:

As you can see, these two variable have two ids that we used previously when we created the JSON request.

How to use Arduino and the TheThings.io

Internet of Things with Android and Arduino: Step by step guide

The IDs of these variables are used in the Arduino sketch:

The last step is creating the token:

Once the variables are configured we can use them to send data.
Running the sketch, Arduino starts sending data to Ubidots. One feature provided by Ubidots is the capability to create a dashboard in an easy way.
For example, for the temperature we can create a simple dashboard to show data sent by Arduino and DHT11:

Below the real Arduino board connected to DHT11 with Ethernet shield. 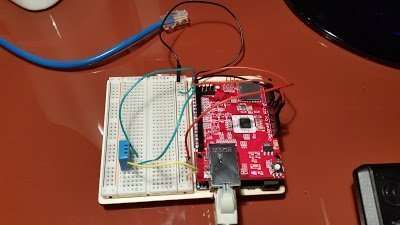 The next step in this Arduino and Android integration project is explaining how to create an Android app that connects to Arduino.

To develop the android app, it is necessary:

Moreover, the android app will use Material design.The final result is shown below: 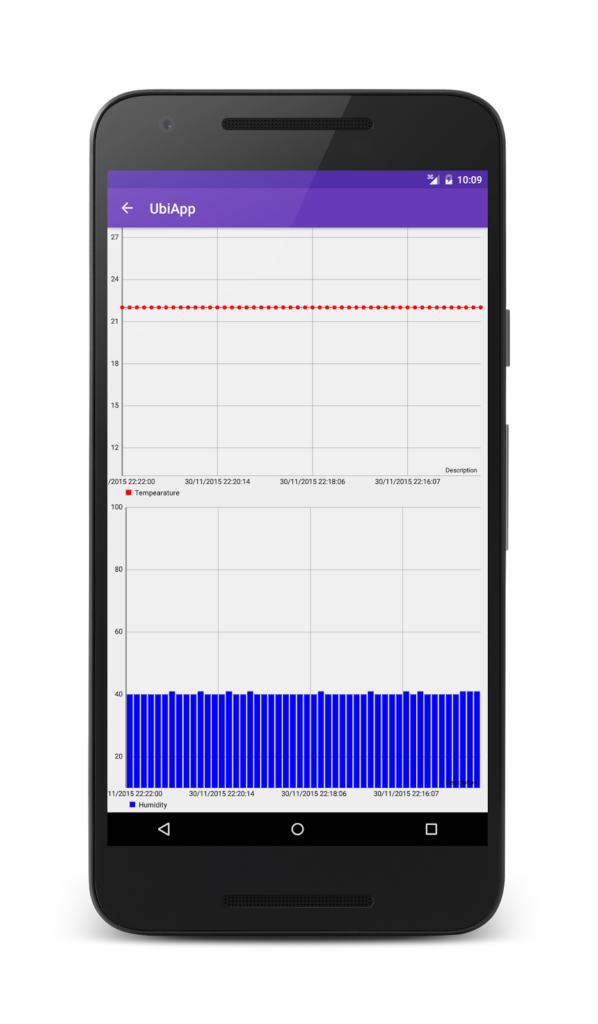 If you want to download the source code go here:

Download app source code
Even if Ubidots provides a client to handle REST requests, it didn’t satisfy me so i prefer to develop a custom client based on OkHttp library. The class that handles the HTTP request is named UbidotsClient.
The client uses an authentication token to authenticate the app to exchange data and variable ids to select the variable to read. If you remember, we talked about these two items in the previous post.
The HTTP client is very easy:

At line 2, the Android app adds the authentication token to the HTTP request header.

At line 3, the app calls the service provided by Ubidots passing the variable id we want to read values.
Finally, at line 5, the app makes the HTTP request and wait for the response. One interesting aspect of OkHTTP client is that it handles requests in a separate thread so we don’t have to worry about ANR problems.

When the android app invokes a remote services using REST, as Ubidots services, it gets a JSON response that has to be parsed so that it is possible to extract information.
The Ubidots response is very easy and it is made by a JSON array and each item contains two values: the variable value itself and the timestamp.
Having in mind this information, the JSON parsing is very simple: in onResponse, or in other words when the response is available, the app parses the JSON:

The body
contains the JSON response as string. At line 7 to 14, the app parses the JSON array and create a simple class that holds the value and the timestamp of each element parsed:

Finally, at line 17 the parser notifies the result to the main class so that it draws the chart.

Chart in Android with MPAndroidChart

Once the data is available, the Android app can draw the chart. To this purpose, we use MPAndroidChart. The first step is adding the dependency in grade file

Before invoking the Ubidots client, the app initializes the chart properties:

At lines 7-12, the app sets up the Y-axis setting the min and max range vaults, while at line 15-18, the app configures the X axis

Now the Android app is ready to invoke the Ubidots client, shown above:

In this snippet, the app creates LineDataSet that is used to draw the values. The same steps are applied to draw humidity chart.
At the end of this post, you learned how to use Ubidots with Arduino and how to retrieve data from Ubidots using Android app.  In the end, we have described how to connect Arduino and Android through Ubidots and how to write Android app that retries sensor data coming from Arduino.