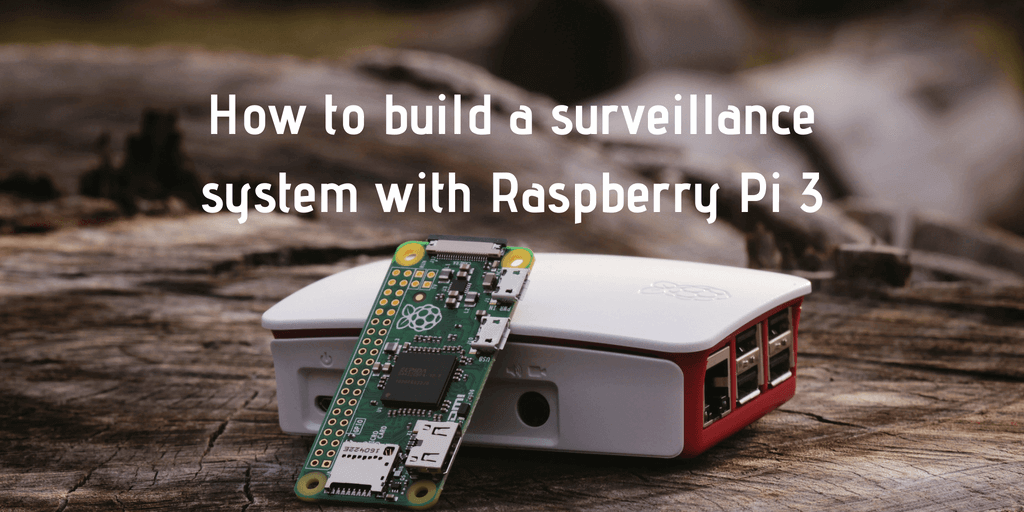 Learn how to build a Raspberry surveillance system in this guest post by Maneesh Rao, the author of Internet of Things with Raspberry Pi 3.

Upgrade all your installed packages to their latest version:

To download and install the latest version of Node.js, use the following command:

Now install it by running the following command:

Check the version number and whether the installation was successful with the following command:

Now that Node.js has been installed on your Raspberry Pi, you can now start with the coding the Raspberry surveillance system.

The first step to build the Raspberry surveillance system is using the camera. You need to include a library from npm. Use the pi-camera library; to install it, run the command in the terminal, as shown below. Check out the official link for the pi-camera npm module at https://www.npmjs.com/package/pi-camera:

Now, create a file with the name, CameraModule.js, and include the pi-camera module in it:

In both the configurations, the following aspects are defined:

Define a cameraInUse flag and set it to false by default. This flag ensures that the camera doesn’t accept any further requests when taking pictures or recording a video. This is to prevent any consequent errors while loading the camera:

Now, define a function that will take a picture when called. This function takes callback as an argument and returns a success message when the picture is clicked successfully.

Python Tools for Raspberry Pi: Unleash the power of Python

Note that module.exports is used to define the function, which will make this function available when CameraModule.js is included (imported) in other modules.

Similarly, define a function that will record the video when called:

The next step to build the Raspberry pi surveillance system is the email module. It is used to send email notifications whenever a trespasser enters the premises along with evidence in the form of a video or photograph. To accomplish this task, use the npm module nodemailer. Download this by running the npm install nodemailer command in the terminal as shown below. Check out the official link for the nodemailer npm module at https://www.npmjs.com/package/nodemailer:

Create a file with the name, EmailModule.js, and include the nodemailer module in it:

Now, set the transport configuration for the email module by providing the details of the email service provider, the email ID from which the email will be sent, and its username and password:

Next, set the email options for sending the email with the video and photo as attachments:

Here, the following are defined:

Similarly, define the email option for sending still photos as shown in the following block of code:

Now, write functions that will send the email whenever triggered:

The most important step in building a Raspberry surveillance system is handling the sensor. Now, it’s time to write the code for sensor modules, which will govern the functioning of all the sensors and LEDs. To accomplish this task, you need an npm module called pigpio, which gives access to the GPIO of Raspberry Pi. To install the pigpio module, run the sudo npm install pigpio command in the terminal as shown below:

Check out the official npm link at https://www.npmjs.com/package/pigpio for more details about the pigpio module.

How to create your first IoT project with Raspberry Pi

Create a file with the name, Survillance.js, and include the pigpio module. Also include CameraModule.js and EmailModule.js, which you developed just now. This will give access to the functions of each module for taking pictures, videos, and sending emails:

Make sure that Survillance.js, EmailModule.js, and CameraModule.js are placed in the same directory. Initialize the Raspberry Pi’s pins for reading out and sending signals to sensors and LEDs:

The PIR sensor’s output (PIR_out) is connected to GPIO 19, so declare GPIO 19 as the input and set the alert event flag to true. The alert event indicates that an alert event will be raised whenever the value at the GPIO changes from low (0) to high (1) or vice versa. You can listen to the alert event and take action accordingly. This is important to build a Raspberry surveillance system.

The positive terminal of LED (red_LED) is connected to GPIO 17. The LED will work as an indicator; whenever a trespasser is detected, the LED will glow. GPIO 17 is set as the OUTPUT pin.

The infrared sensor’s output (IR_out) is connected to GPIO 5, which is declared as the INPUT pin, and the alert event flag is set to true.

The trigger terminal of the ultrasonic sensor is used to generate high-frequency ultrasonic waves. The trigger pin is connected to GPIO 16, so declare it as the OUTPUT pin.

Make sure you initialize the LED to low level (0):

First, write the code block to read the data of the PIR sensor:

The alert function returns a callback with two parameters: one is level and the other one is tick. The level parameter indicates the state of the GPIO at that moment and tick is the timestamp at which the change in state is observed at the GPIO. So, the alert event is checked and if the level is high (1), then the takePicture function of the camera module is called to click a photo of the trespasser immediately.

Then, the output of the buzzer and LED indicator is set to high to raise the alarm. Once the success callback is received from the camera module’s takePicture function, the sendMailPhoto function of the email module is called, which sends the alert email along with the photo of the trespasser to the owner of the house.

Now, write the code for the IR sensor, which is very much similar to the PIR sensor code:

An IR sensor works in the exact same way as the PIR sensor. The only difference is that it records a video instead of taking a still photo.

Lastly, it’s time to write the code block for the ultrasonic sensor module:

Making use of the trigger function of the pigpio module, a high-pulse is sent to the trigger pin of the ultrasonic sensor for 10 microseconds, which causes the sensor transmitter to emit a burst 8 high-frequency pulse, which makes the output at the echo pin high.

The output of the ultrasonic sensor is taken from the Echo pin on which you are listening for the alert event. As soon as the ultrasonic wave is transmitted, the state of the Echo pin changes to high and the alert event is fired, which returns a callback with two parameters. The first is the level, which is used to check whether the state of echo is high (1) or low (0) and the other is tick, which is used to check the timestamp when the state changed.

The state of the echo is changed from low to high and this timestamp is saved as startTick. When the waves get reflected from obstruction and fall on the receiver, the state of the Echo pin is changed from high to low. This timestamp is saved as endTick. Now, to get the distance of obstruction from the sensor, you need to record the time taken by the ultrasonic waves to travel to and from the sensor—subtract startTick from endTick. The tick is the number of microseconds since system boot. Its value is an unsigned 32-bit quantity. So, to get the correct value after subtraction, use the right shift operator. Once you have the travel time, you can then calculate the distance.

Once you have the distance, check whether the distance is less than 10 cm. If it is, raise an alert by lighting the LED, beeping the Buzzer, taking a picture, and finally sending the alert through email.

The code part is finally completed. Execute the code by running the following command in the terminal:

This is the output for the PIR sensor:

This is the output of the IR sensor:

This is the output of the ultrasonic sensor:

The following is a snapshot of the email notification received as an alert: 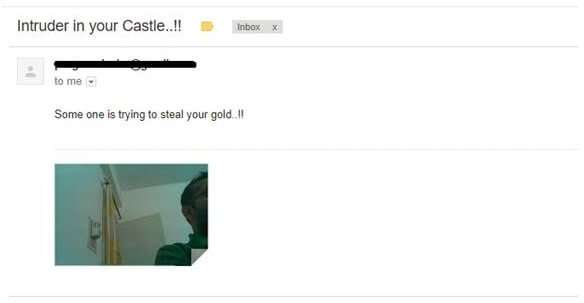 If this article intrigued you and made you want to learn more about IoT and Raspberry Pi 3, you can explore the book, Internet of Things with Raspberry Pi 3 by Maneesh Rao. The book covers several powerful features of Raspberry Pi with hands-on, practical examples, and also guides you through the nuances of building a weather station, facial recognition systems, and security surveillance systems.