CSRMesh is a mesh protocol developed to run over Bluetooth Low Energy. It extends the traditional Bluetooth Low Energy functionality and enables it to relay messages over longer distances. The protocol creates a mesh from CSR SoC-based (CSR1010 and CSR1011) devices. This solution is very effective for a home automation system, as it is not bound to a transmission range. CSR also markets its development kit, which helps in prototyping. Since it is a BLE-based device, you can connect through your Android, iOS, or desktop device.  Here is the complete list of products offered by CSRMesh:

It is advisable that you buy a CSRMesh development kit that comes with at least three boards to make a full mesh structure. A complete list of devices with their distributors in each continent is available at http://csrcorpkfxpa9lag2.devcloud.acquia-sites.com/products/applications/sales-csr-solutions-provider-web-shops.

Here is a view of a CSRMesh development board: 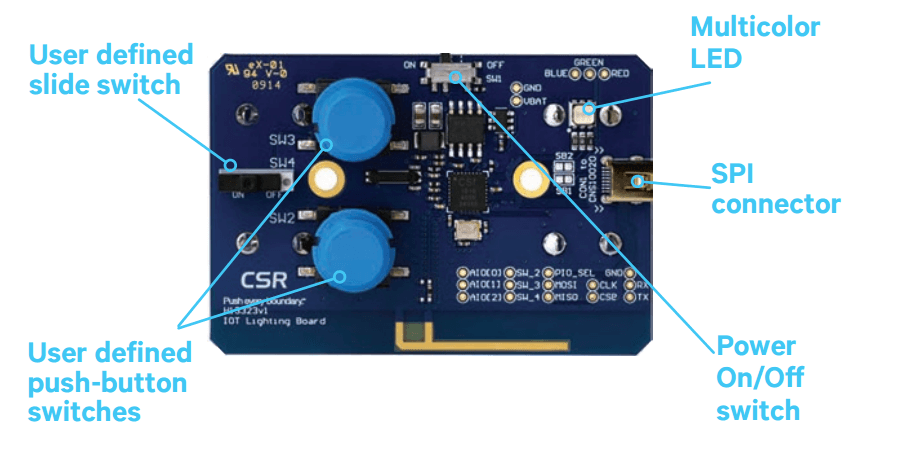 A CSRMesh development board comes with the following features:

In 2016, Qualcomm acquired CSR, and it now sells CSR products while preserving the brand name. A list of CSR products can be found on the Qualcomm website, under the Bluetooth Products section (https://www.qualcomm.com/products/bluetooth).

Setting up the CSRMesh development kit

A QR code representing a CSRMesh device tag can be found with the development board:

You can find the following information on the service tag:

Follow these steps to program service tag information (UUID, AC, and so on) in the non-volatile memory (NVM) of the board:

Here is a view of the non-volatile memory of CSRMesh:

Copy the CSRmeshDemo.apk file and install it manually. Make sure to check Unknown sources in the settings of your Android phone.

Step 1 – Connect to the network

Once you start the app after installation, you will get a Connecting… dialog box on your screen: 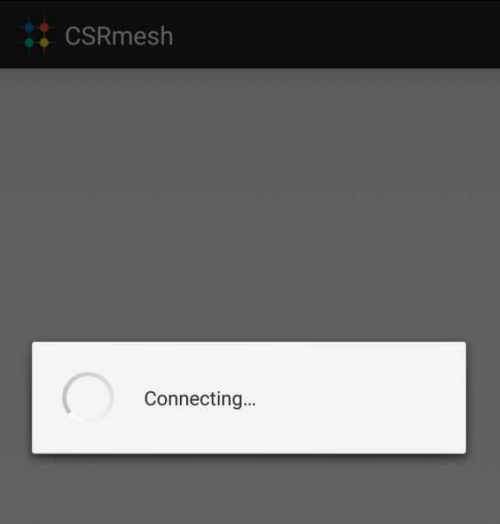 Step 2 – Set up a mesh network

It is recommended that you use the authorization code for every associating device. However, you can find a checkbox that disables the device authorization feature. This feature should only be used if you are using an older version of the kit and the devices do not support the AC feature.

Choose Device Association from the dropdown. It will open a screen with a list of available devices for association. This list will also show the 128-bit UUID of the devices: 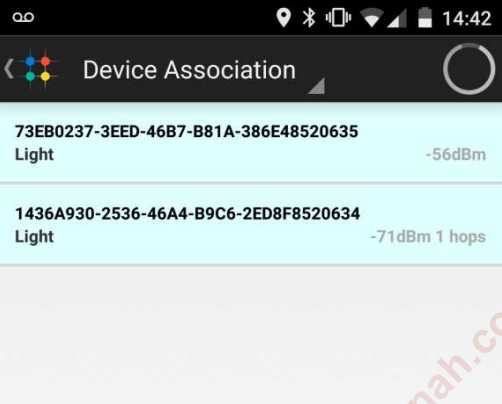 At this point, a QR code will come in handy as it is required to make the associations. At the bottom of the Device Association screen, you can see a QR Code button. Press it and scan the QR code using your device camera.

By this point, you have successfully associated and authorized the devices on your mesh network. The CSRMesh application also provides the functionality to control devices through this app.

Navigate to the Light Control or Temperature Control screens to get a complete list of control options. You can choose the color using a color wheel and associate that color to an individual light or a group of lights. Similarly, you can control the thermostat by tapping up and down on the screen. This control can be run over an individual device or a group of devices.

Here is a view of the control screens: 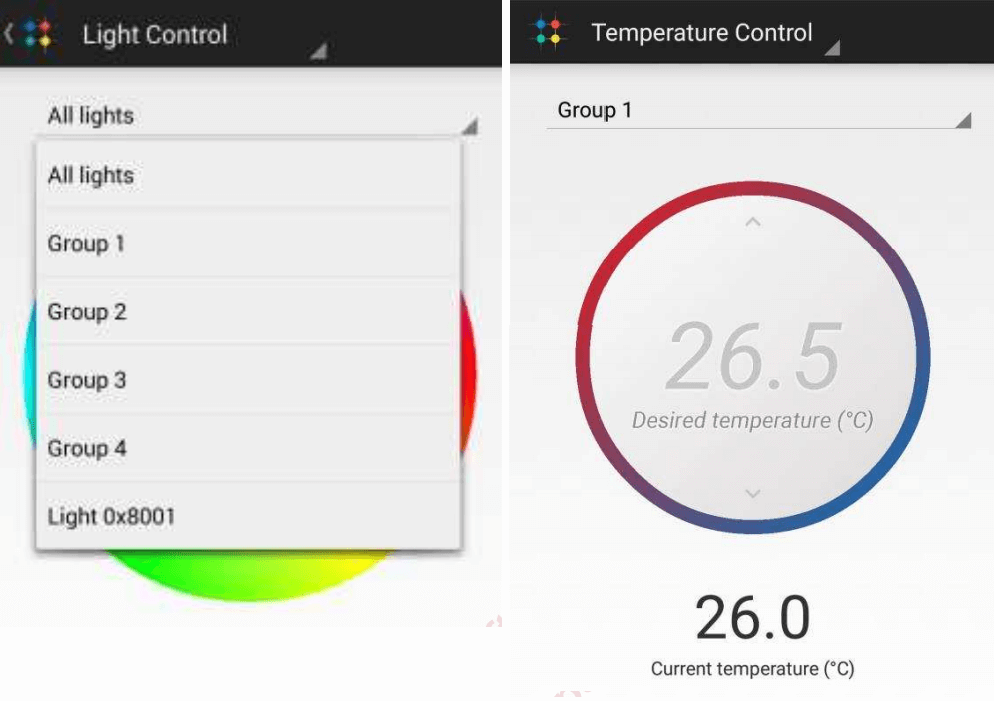 Navigate to Configuration from the drop-down menu. By default, the app creates four groups. You can get additional options by long-pressing on any group. Renaming, deleting, device information, firmware information, and request data options will be visible in the pop-up menu.

In the Configuration menu from the dropdown, select the group you want to edit. It will give you all the available devices that you can associate with this group. You can check and uncheck the devices from the group and click on the Apply button at the bottom of the screen.

This section describes the CSRMesh library for Android so that you can learn to make your own control apps. You will be walked through the functionalities offered by this library and how it can be used in an Android application. You can also refer to the CSRMesh demo source code provided with this chapter.

The CSRMesh library for Android comes with MeshService and Model classes dedicated for different tasks. This MeshService represents an Android service that provides methods to connect to a bridge and its associated devices. It can be considered as the core of the CSRMesh Android API, which is responsible for performing central-peripheral communication. Once you make a connection, the next step is to send control commands to the mesh network. This can be performed using Model classes.

In order to understand the different components of the CSRMesh Android library, refer to this block diagram: 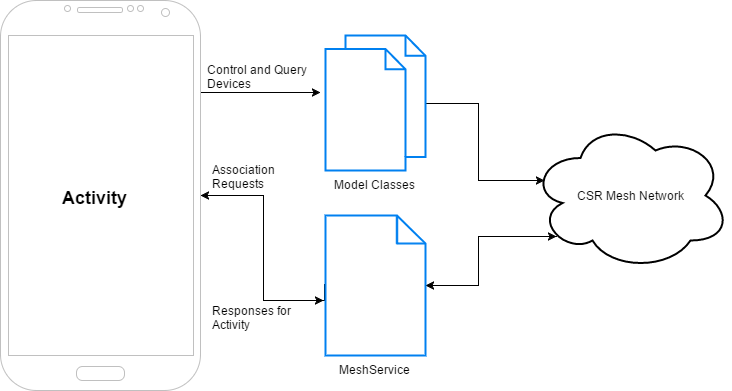 Getting started with the CSRMesh Android library

After attaching the library, go to the AndroidManifest.xml class to add a MeshService. This can be achieved by writing this in your Manifest.xml file under the <application> tag:

Also, provide the BLUETOOTH and BLUETOOTH_ADMIN permissions in your application using the following lines of code:

Since MeshService is the core class of the CSRMesh Android library, you will need it in your main activity. Create a global variable and bind it inside the onCreate method:

If you notice, there is an unknown variable in the above code, mServiceConnection. This is an object that will handle the service connection. Declare it using the following code:

MeshService is now ready, but the CSRMesh stack has not yet been initialized. First, declare a handler that is responsible for receiving messages from CSRMesh (which can later be used in the user interface of the application). In order to do this, set a mMeshHandler in mMeshService:

The next step is to start a Bluetooth scan to detect CSRMesh devices in the vicinity. For this, you need to declare a ScanCallBack object, which will be called as the CSRMesh library hears the scan response:

This mScanCallback function must explicitly call mMeshService.processMeshAdvert() for every advertisement it receives. This will allow the library to consume any CSRMesh advertisement packets. The library is smart enough to automatically enable and disable Bluetooth scanning according to your requirements. But if continuous scanning is required, you can do it by calling this method:

By default, BLE notifications are enabled on the bridge, but you can manually enable it by calling this method:

After scanning, you can connect the library to the bridge by calling the following:

The bridgeDevice variable is the BluetoothDevice object that represents a bridge device. Scanning for a bridge device is the same as scanning for BLE devices. Since you want to filter only CSRMesh devices in your scan, you can use the bridge service UUID, 0xFEF1.

In the previous code, a handler object was associated with mMeshService, which is responsible for receiving responses from CSRMesh. It is better to extend a custom class that inherits the handler class for your custom implementation. The messages received by the handler are defined in the MeshService class. For example, when an association message is caught by the handler, it will have the value of MeshService.MESSAGE_DEVICE_ASSOCIATED. So in order to write a handler for this kind of response, you need to write the following code:

Since these are messages coming back from CSRMesh devices, some data may be associated with them. In order to retrieve this data, you can use the following tags:

You can use these classes in order to perform tasks on mesh devices. For example, if you want to get information about a device, you can use this:

Here, mDeviceId is the ID of the device you need to acquire information from. Similarly, if you want to obtain the firmware version of a particular device, you can write this:

An example of controlling a mesh device is to set the color of the light. You can call LightModelApi to set RGB colors of the light: