This post describes how to use Android text to speech (TTS) in your Android app. Using this step by step guide we will build a Text To speech Android example

Android text to speech is very interesting because it can add some nice features to an android app. There are several scenarios where the text to speech Android feature is useful.

What is text to speech? Text to Speech is a feature of Android platform that can be used to “read” the words and make the app talking, or more in detail to synthesize text.
This post covers how to implement TTS in Android and how to control some interesting properties of the speech engine. This Text to Speach Android example will be very easy to focus our attention on how to use text to speech in Android.

Let us a built the Android App.

The Text to Speech Android example app has an EditText widget where we write the sentence that the Android app will read. Moreover, the Android app has some controls to control the speech engine:

If you are interested in the Android app source code you can download it using the button below:

The final result of the Android app is shown here. 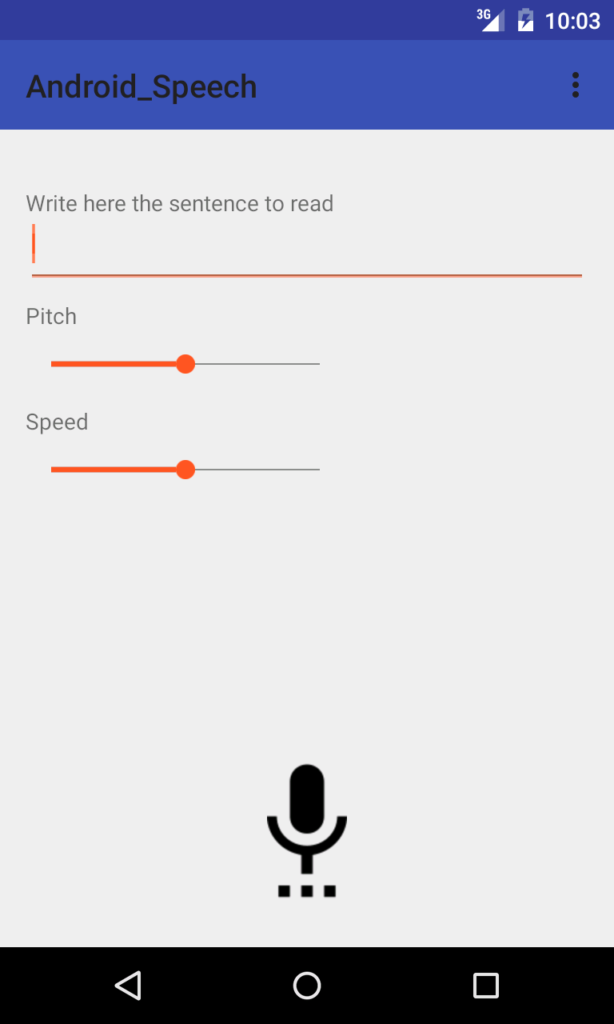 The first thing we have to do is initializing the TTS engine. The class that controls the engine is called TextToSpeech

where the first parameter is the Context and the other one is the listener. The listener is used to inform our app that the engine is ready to be used. In order to be notified we have to implement TextToSpeech.OnInitListener, so the Android app becomes:

The callback method named onInit is invoked when the initialization process completes. In this method,  we set the default language that the engine uses to read the sentence.

TTS Android example: How to read the sentence

we simply have to call the speak method to make our app reading the text!

We can have more control over how the engine read the sentence. We can modify for example the pitch and the speech rate.
In the app, for example, we used two seek bars to control the pitch and rate. If we want to set the voice pitch we can use setPitch passing a float value.
On the other hand, if we want to change the speech rate we can use setSpeechRate.
In our app, we read this value from two seek bars and the speech method becomes:

At the end of this article, you learned how to develop an Android app that uses Text to Speech in Android. We have developed a Text to Speech Android example app that we can use to read sentences.